Aukštojas Hill is the highest point in Lithuania and rises to 293.84 metres above the level of the Baltic Sea. It is located in Vilnius Region, at the Juozapinė Geomorphological Reserve near Medininkai village. A large stone rolled to the top of the hill and a concrete geodesic sign show the name of the hill as well as its height.

In order to preserve the fragments of the old moraine massif terrain, the Juozapinė Geomorphological Reserve was established in 1992 and covers an area of 251 hectares.  The Reserve is located on the territory of the Medininkai Highlands, which in turn covers the north-west part of Ašmena Highlands. The terrain in this area is quite different from other Lithuanian highlands and is considered to be one of the oldest in the country. It was formed during the penultimate ice age and, as the result of the last ice age, was deep-frozen for many years.

About 10,000–15,000 years ago, the entire territory of the country was covered by a glacier. Various moraine sediments accumulated around its edges including boulders, gravel, sand and pebble. Powerful glacier waters polished the surface of the Medininkai Highlands making it fairly flat and clear of any hills or gullies. This is why the view that opens up from the observation tower located at the top of the 300-metre high Aukštojas Hill still leaves you wondering whether you are really looking at the landscape from the highest point in Lithuania.

It should be noted that there are no lakes in the Medininkai Highlands. Scientists claim that there used to be some, but that flowing glacier waters drained the lakes and flattened the shores. Today, the main elements of the landscape are valleys, ravines and pockets as well as hills that vary from prominent to flat-sloped and ridged ones.

For a long time, Juozapinė Hill had been officially regarded as the highest point in Lithuania. It is also located on the Medininkai Highlands, about 1 km from Aukštojas Hill. In 2004, specialists from the Institute of Geodesy at Vilnius Gediminas Technical University, using the latest GPS technology, measured the elevation difference between the two hills: it was about 1 metre. Thus, Juozapinė Geomorphological Reserve can be proud to have the two highest points in Lithuania.

Aukštojas Hill has a symbolic meaning for Lithuania. It was excluded from the scope of the country’s agricultural land and is now a tourism and culture site. Various projects and artistic events are held on Aukštojas Hill. Additional events include annual celebrations of Mindaugas Coronation Day (6 July) and International Earth Day (20 March), the World Lithuanian Games as well as various ecological, ethnographic and other cultural events.

Another fact worth noting is that in 2006, a solemn celebration gave start to an incredibly important gratitude programme. Altogether 300,000 ‘Thank you’ signatures of Lithuanian citizens were gathered and made their way to Iceland. This symbolic gesture was to thank Iceland for being brave enough to become the first country to recognise Lithuanian independence! The written expression of Lithuania’s gratitude to the people of Iceland was presented to the country’s President. The ceremony of gratitude brought the two geographically distant countries closer together as it took place on the highest Icelandic peak Hvannadalshnukur(2,120 m)where a handful of Lithuanian soil was spread.

Visitors to Aukštojas Hill are invited to take a look at the beautiful pine forest, planted oak forest as well as a special artistic feature decorating the mountain called the Balts’ Sun Circle. The area has comfortable benches for tourists, a parking lot, bicycle racks, an observation tower and information signs.

Aukštojas is the name of the chief deity of the Balts mentioned in written sources from the 14thcentury as the supreme heavenly deity, the creator of the world and the protector of the principles of morality and justice. The supreme God is the first, eternal and has no beginning. Ancient Lithuanians gave him different names such as Praamžius, Sutvaras, Vaisgamtis, Labdarys, Gyveleidis, Ūkopirmas among others.

Aukštojas existed before the creation of the world, when darkness still prevailed. He was believed to take on the image of a pigeon and fly around the world dividing it into parts. He scattered the darkness with light and opened up a path. While walking on it he spat to his left side and saw a human-like creature appear from the water. God commanded the creature to dive into the water and bring him the seeds of the earth. On the third dive the man came back, his mouth and ears filled with seeds. Aukštojas scolded him for being so greedy, sowed the seeds and soon saw growth on the land.

The Balts’ Sun Circle symbolises an ancient altar. Its centre contains an image of a crown that is, it seems, elevated above Lithuania. The crown is surrounded by the granite heads of four horses. The Žemaitukas breed of horses look at different sides of the world, protect the crown and spread the news about Lithuania to all corners of the globe.

Dalia Matulaitė’s creations reflect Lithuanian folk art and highlight the features of ancient Baltic and other cultures. The sculptor hopes that the sculpture created specifically for this unique place will unite and bring together the Baltic tribes. The Balt’s Sun Circle is the place where all descendants of the Balts can light the fire of their future unity. On 22 September the fire was lit as a symbolic message to be sent to the Baltic brothers and sisters in the neighbouring countries. 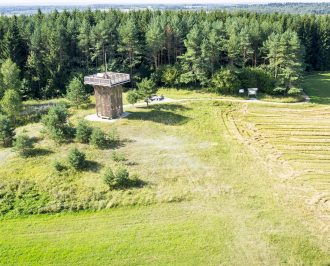