The Struvė Geodetic Arc is 2,820 metres long and illustrates unique achievements in the field of Earth Sciences. This spectacular project took place at the beginning of the 19thcentury and aimed at studying and determining the size and shape of the planet Earth as accurately as possible! Thanks to the close collaboration between scientists and monarchs from different countries, a significant and globally important goal was achieved: the longest section of the Earth’s meridian arc was precisely measured. This achievement of extraordinary importance had an impact on all subsequent calculations even a century later.

Essentially, the Struvė Geodetic Arc represents a measuring instrument specifically designed to calculate certain parameters of the Earth, i. e. its form, size and the meridian length. This arc stretches from the historic city of Izmail at the delta of the Danube River by the Black Sea to the Fuglenes Lighthouse on the coast of the Arctic Ocean. The arc connects the points between southern Ukraine and Northern Norway, and goes through ten modern states including Ukraine, Moldova, Belarus, Lithuania, Latvia, Estonia, Russia, Finland, Sweden and Norway. Interestingly, the shape of the arc closely resembles the line separating Western and Eastern Europe.

In 2005, the Struvė Geodetic Arc was put on the World Heritage List of the UNESCO World Cultural and Natural Heritage Convention (hereinafter, the ‘World Heritage Convention’). Three of the 34 Struvė Geodetic Arc Points on the list are located in Lithuania! These are the points of the state geodetic network as selected by the National Land Service under the Ministry of Agriculture and Vilnius Gediminas Technical University Geodetic Institute:

Struvė Geodetic Arc is named after the astronomer Frederick George Wilhelm Struve, who developed a method for measuring the meridian arc. Struve was a scientist who lived at the end of the 18th–beginning of the19thcentury. He worked as a professor and director of the Astronomical Observatory at the Estonian Tartu University for almost 20 years.

The Struvė Geodetic Arc is a chain that stretches for about 2,820 km and connects the fragments of the triangulation networks.  Triangulation (lat. triangulum – a triangle) is a specific method used to find the location of geodetic points for the formation of triangular chains of the land areas to be measured. It is a specific method used in geodesy for the formation of maps and typographic plans. In short, triangulation is based on the formation and calculation of triangles and their networks. The Struvė Geodetic Arc Points are specifically marked vertices of these triangles!

The oldest section of the triangular network chain was formed in Vilnius Governorate between 1816 and 1821. Karl Tenner, an Estonian officer of the Tsarist Army, designed the research project and organised the measuring works. Between 1822 and 1831, Professor F. G. V. Struve himself organised the formation of the triangulation network in Estonia and Latvia in 1822–1831. The results of both research projects were combined in the 1830s, and the segments of triangular networks of other countries were incorporated as well.

Professor Struve systematised the research results aimed at measuring the meridian arc and detailed them in his work ‘Arc du Méridien 25°20’. It should be noted that these 19th-century geodesic arc calculations were not only the most accurate at the time, but also served as the basis for further calculations. For a whole century onwards, this triangulation method was used for the calculation and adjustment of the parameters of the Earth.

In 2005, thanks to the efforts of ten cooperating countries, the Struvė Geodetic Arc Points were inscribed in the UNESCO World Heritage List. This heritage landmark was recognised as having an exceptional universal value. According to the World Heritage Convention, an exceptional universal value is a special cultural and/or natural value of a heritage site that is not limited to national borders, i.e. it is important in the international context. It also emphasises the relevance of such value not only for today, but also for future generations.

It is worth noting that national or regional landmarks are not automatically put on the World Heritage List. Only the criteria established by the Convention Committee and reviewed on a regular basis determine the declaration of a landmark as a globally significant heritage site of exceptional universal value. Exceptional universal value of the Struvė Geodetic Arc was recognised on the basis of three out of ten world heritage criteria.

According to criterion II, it exhibits an important interchange of human values uniting scientists and monarchs from different countries to collaborate in the interest of scientific progress. The study of the Struvė Geodetic Arc determined an important stage in the development of the Earth Sciences. The results of the study are the first calculations that helped determine the exact size and shape of the Earth.

According to criterion IV, it is a unique technological ensemble created with the help of a special measurement methodology, which determined the development of the Earth Sciences. The Geodetic Arc points are considered a real and intangible part of this measurement technology.

According to criterion VI, the Geodetic Arc and its points constitute a direct and obvious testament to humanity’s interest in the world. It also highlights the connection with the Newtonian theory of the Earth’s geoid, which prompted the search for precise measurements of the Earth’s parameters. 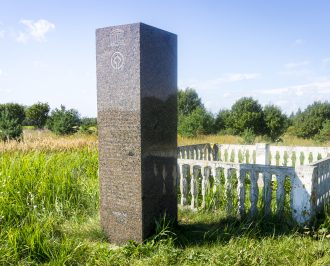